This was a  blog by yoga teacher Kathleen Reynolds of Allay Yoga. https://musepracticeallay.wordpress.com/2015/04/01/dharma-discussion-seva/.

Kathleen introduces Lauren Rubenstein from Go Give Yoga, the organization to which Kathleen donates all proceeds from her monthly Early Morning Meditation Classes.

A Note From Kathleen:

Seva is a Sanskrit word often translated as “selfless service.” For me, the spirit of such a concept is best understood in its demonstration rather than its dissection. For this reason, I am happy to offer this space to Lauren Rubenstein who just recently returned from her seventh seva trip to Haiti with Go Give Yoga. I first learned of the work of Go Give Yoga when Lauren presented on a panel during my yoga teacher training.

If you are interested in learning more about Go Give Yoga, please visit http://www.gogiveyoga.com. I am honored in my own very small way to support their work by teaching the monthly early morning meditation classes at Allay on the second Tuesday of each month — all donations from these sessions go to Go Give Yoga. 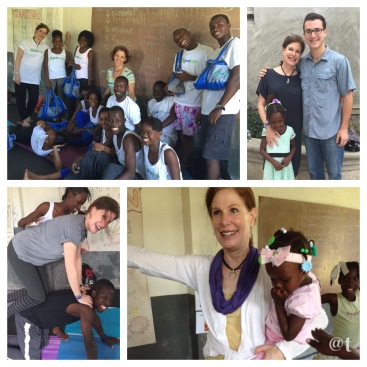 Pictured: Lauren with some of the young Haitian teachers they trained; Lauren, her son Jake and Michelda – ready for church; Lauren and Showty having fun with partner poses – he is the first Haitian yoga teacher they trained, and he has become a fabulous kids’ yoga teacher; some of the little ones tag along with their older siblings, so Lauren notes “We improvise!” 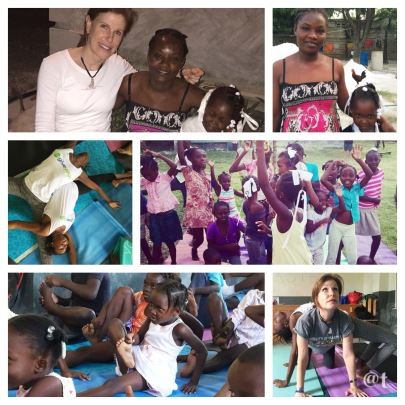 Pictured: Lauren with Michelda and her mom, Marie Claude; more shots showing the joyful connections in the yoga classes, including when Alexandra spontaneously led a class – Lauren notes that “As the cook’s daughter, she has probably taken as many yoga classes as any of the kids, and show real promise as a teacher despite her young age.”

Duvennes, Michelda’s younger brother, in savasana. The kids often fall asleep; many don’t have real beds to sleep on, or space of their own, and the mat provides their own space, even if only for an hour.

I know lots of people with Life Plans: Visions! Short-term goals! Long-term goals! Action lists!…. Contrary to what appearances might suggest, I am not one of them. Had an intuitive told me I would ever:

I would have laughed.

Seven seva trips to Haiti later, I am so grateful for two of the more impulsive decisions in my life: to take a children’s yoga teacher training in 2009, unclear why I was doing it; and to sign on for a Haiti trip with Go Give Yoga in July 2011. The first trip was monumental. I truly had no clue about Haiti or any other “Third World” country. Conditions in the post-earthquake tent camp were shocking. Even as I was trying to process what I was experiencing, I kept thinking with frustration, there will be no words to describe this situation once I return home.

Four years ago, Go Give Yoga went to Haiti with the idea that teaching yoga to children who lived in extreme poverty and had experienced a tragic earthquake just might be a way to serve. Staying on the grounds of Partners In Development (www.pidonline.org), a nonprofit that provides free medical care, a child sponsorship program, small business development and other wrap-around services, we worked alongside medical volunteers. During shared meals, some of them loved to recall in graphic detail what they had seen in the clinic. We heard from Mr. Genois, PID’s social worker who is tasked with determining which family’s needs — all dire — should take priority. For example, if someone told him their tent was leaking and they had to sleep standing up when it rained, he would wait until the next rain and check it out. In other words, a job that would break most people’s hearts.

For the most part, the children we teach don’t get much adult attention. Many of their parents are out sun-up to sundown trying to sell something on the open market so they can give their kids a hot meal that day — something the children cannot take for granted. Most school in Haiti is private, and many families simply cannot afford tuition, uniforms and books. Clean drinking water is a luxury. We quickly learned that the children were coming to yoga hungry and thirsty, so we incorporated a hot meal program. We did arts and crafts with the kids after yoga. The first time I cried was when we gave the children drawing materials, and so many of them drew houses….

But it wasn’t all trauma and tears. The overwhelming majority of the children we taught positively lit up with joy during yoga. Despite the language barrier which required translators, our experience confirmed what know: that yoga is about connection — to one’s own wholeness, and to each other. Some of the most poignant moments were looking into a child’s eyes during partner poses, as we were hand-to-hand or foot-to-foot. Holding the little girl who never cracked a smile and would not lie down during savasana (Michelda stole my heart and I have been sponsoring her through PID ever since). Spontaneously doing yoga with kids who show up between classes, when there is no interpreter, just gesture and touch. Indeed, neuroscientists appreciate how important this non-verbal, “right brain to right brain” connection is to human development.

Despite the inner knowing that we were being of service, reservations haunted me after the first trip. The medical volunteers were doing such “important” work, I thought, while we were “just playing.” I overcame these doubts by reminding myself that play is the work of children; that most NGOs in Haiti provide basic needs, while fewer offer children playful human interaction. And there were the wise words of Mr. Genois before we left: “I have been watching you out my window all week. What you do is so much more than play. You are reaching the children’s bodies, minds and hearts.”

The cultural divide also gave pause, especially once I started educating myself about Haiti. There’s a term in social work, “well-meaning white woman.” What could outsiders like us who could never hope to fully understand this culture possibly have to offer? How could we reassure parents and teachers who deeply suspected that yoga was about teaching kids to levitate, or getting the spirit to leave the body? On the other hand, wasn’t yoga an equally foreign practice when it first came to the U.S. from India?

Like any subject, the more I learn about Haiti, its culture and history, the more I feel humbled by what I don’t know. And yet. Trip #7 felt like a watershed, a breakthrough of cultural barriers.

~PID’s cook, a conservative Christian woman whose church forbids women to wear pants, makeup, jewelry or nail polish (as I learned when I started painting the girls’ nails and an older girl came over and signed that their parents would punish them for it), began to attend class. I had shown her downward dog on a previous trip, as a possible way to ameliorate her leg pain.
~A local pastor told us yoga was helping him with his sermons.
~The older teens and school teachers we had trained to teach yoga were moving ahead full speed, teaching classes in their communities.
~Most poignantly, the kids were teaching each other — and us! Nine-year-old Alexandra assembled a group of 18 and taught an impromptu class. Six-year-old Miranda conducted a private session for the 15-year-old American “brother” of her American sponsor family. When I looked and saw Miranda sitting face-to-face and leading Miles in meditation, following by asana and ending with savasana, yoga again proved to be a profound form of non-verbal connection.

In what is sometimes referred to as the “Republic of NGOs,” aide workers are criticized for driving around Haiti in shiny black SUVs, their feet never touching the ground. Go Give Yoga is on the ground in Haiti, literally as well as figuratively. Are we helping or fixing Haiti? Definitely not – nor is that our intention. Are we serving Haiti by offering our presence? By sharing a practice that might grow inner resources in some of the least-resourced children? From the bottom of our hearts, we hope so.